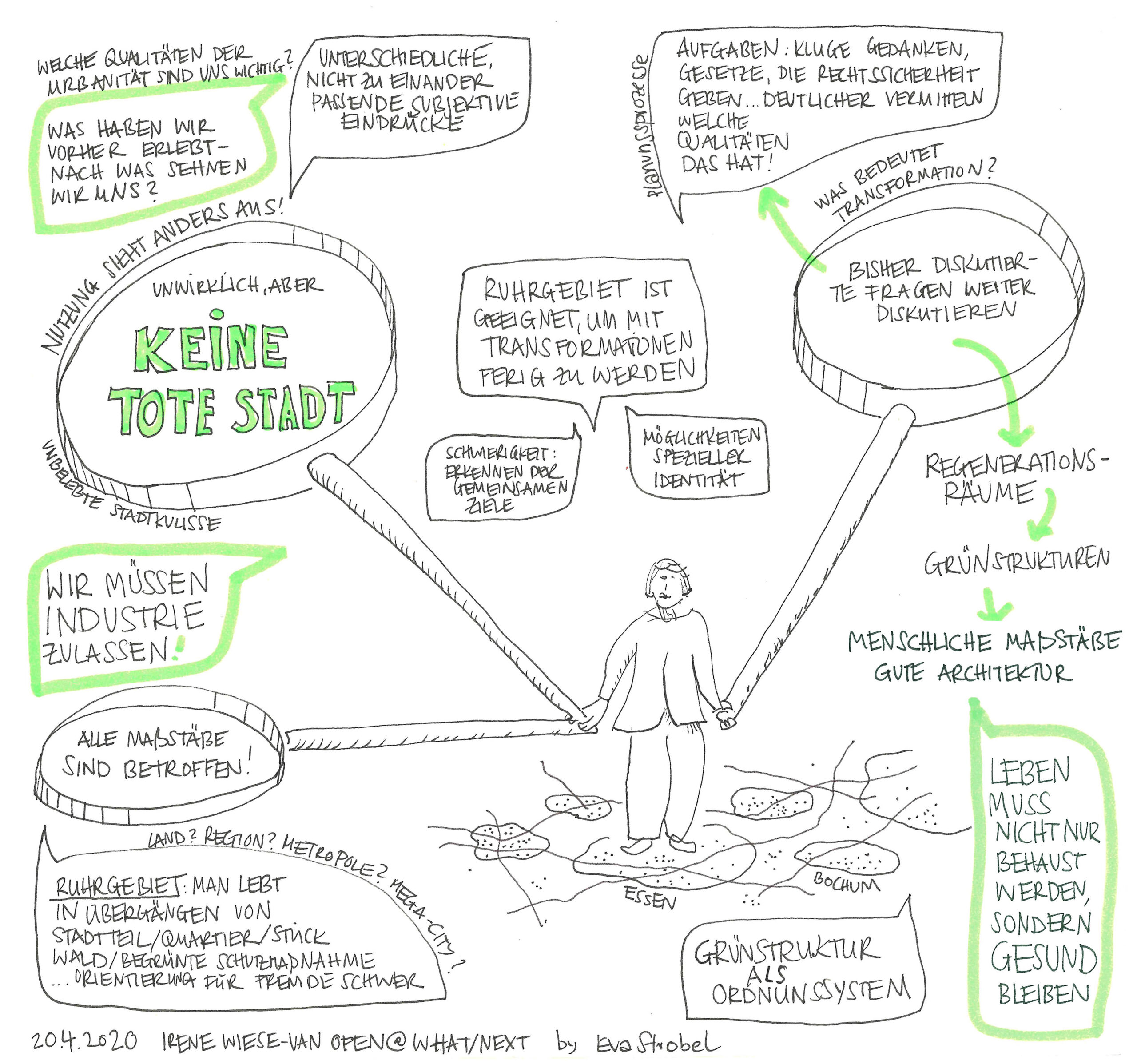 The Ruhr area is a specific urban context, which has been formed by profound transformation processes in recent decades. In order to observe the changes that are triggered by the corona virus, the team of What/Next spoke with Dr.-Ing. Irene Wiese -v.Ofen, architect and former councillor of the City of Essen for Urban Planning, Building and Land. She portrays space and people of the Ruhr area, highlights future issues relevant to planning and pleads for a new balance of planning between commitment and imagination and openness for the future.

Different spaces react in different ways to events that trigger transformation. The history of a region, how it has mastered past transformations or by which intensity and frequency it has been transformed in the last century, also determines people’s reactions to the crises locally. The order of space is relevant here, i.e. how built spaces, infrastructures and landscape can accommodate changed uses and – looking ahead – with what cultural imprint or mobility the mindset of the population responds to the challenges and how new structures and rules are jointly established. What do we learn from the crisis? What is our space and our organisational structure good at? What did we miss during the lockdown? These are questions that concern us now but they are not necessarily new topics. The current crisis is an opportunity to rethink fundamental issues of urban development. It stimulates us to ask questions and to see previously held discussions on urbanity in a new context.

Life does not only have to be sheltered but includes so much more – and needs to stay healthy.

The Ruhr area is an agglomeration of settlements, districts, quarters, wooded areas and green spaces that merge into one another. It can initially not be classified in common spatial categories such as metropolitan region, urban region or rural region – the term polycentric urban landscape is probably the closest description. In the past, the Ruhr area experienced phases of rapid population growth due to industrialization, which in turn led to the merging of the cities. In the course of the recultivation of the industrial wastelands, the Ruhr area received important regeneration areas. Those originated from and were aligned to the greater green space concept of the Regional Green Corridors of the 1920s. This is why the region today differs fundamentally in its character from other regions in Germany of similar density.

Irene Wiese -v.Ofen identifies urban-regional green space structures, also in their function as regeneration areas, as a future topic. This should be further discussed in times of a lockdown but also in the context of urban-regional densification processes. She calls for the Ruhr Area to acknowledge its own spatial characteristics. The current crisis triggered by the Corona-virus is an opportunity to appreciate the uniqueness of this multilayered, multiform and changing region and to strengthen the region’s identity.

We need imagination and openness and have to learn how much commitment we have to gain, and what can be released that does not need to be regulated.

The crisis invites us to reflect on the core tasks of spatial planning. Municipalities can only create preparatory conditions: provisioning, infrastructure and institutions oriented towards the common good. This is accompanied by the multifaceted actions of third parties. In urban planning, it is important to balance out how much commitment is necessary and how much openness and possibility to absorb changing developments. Irene Wiese -v.Ofen emphasizes that consensus-based action, as practiced in spatial planning in Germany, is a good basis for guiding cities through the crisis. Legal certainty in planning is multi-layered in its creation and pursuit, often long-winded in the negotiation processes, but it is a great asset in Germany that we should be fond of and appreciate more.
–