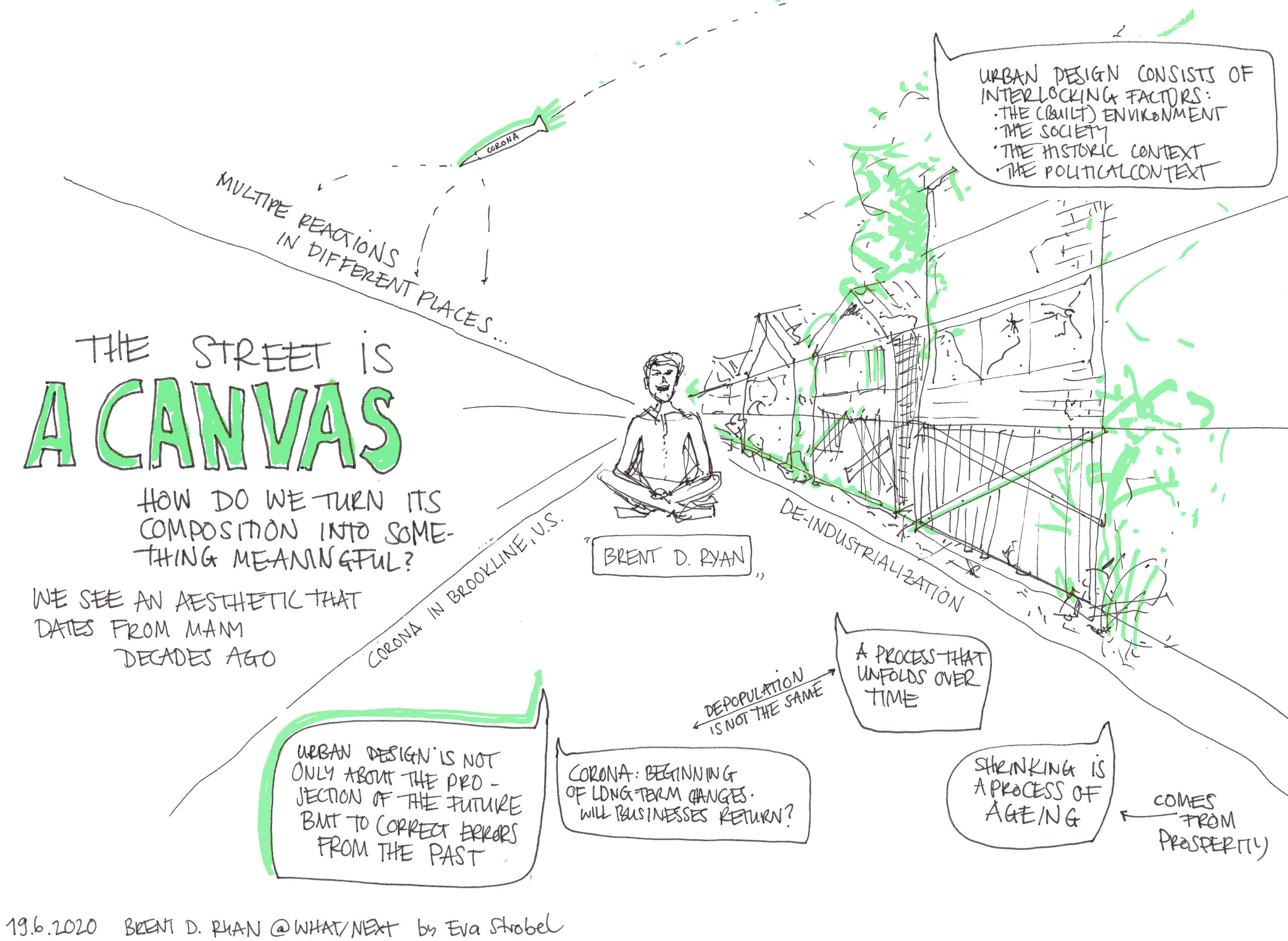 The United States of America is yet another context, in which the current crisis, caused by the spread of the Corona-Virus, is unfolding. How does the government respond in the U.S.? What specific (urban) context do we find? Brent D. Ryan looks closely at the built environment of our cities and pleads for a deeper understanding of what Urban Design as a discipline encompasses and what its future tasks could be.

The Virus takes on a different dynamic in the U.S.: reproduction numbers are still high, the lock-down is still active in wide parts of the country. American towns and cities, with their specific density and local concept of public space are prepared very differently to make life happen or preserve it during this crisis. Because of the spread of the Corona-Virus people are not leaving their towns for good like we know from shrinking cities, but nonetheless we are intrigued by looking at the known phenomenon of shrinkage, as our public spaces have been, or still are, similarly emptied. From this observation – of what is happening right now on the streets and squares – we are looking to understand how the built environment is shaped and which resources that built environment provides for its future development.

The street is a canvas: we see an aesthetic that dates from many decades ago. How do we turn its composition into something meaningful?

In the past decades, many towns and cities around the globe have been shrinking and thus become research objects. A frequent initiating factor for why people leave is economic instability, often related to the process of de-industrialization of whole regions. What has been observed and analyzed are the abandonment of houses, the processes that caused it and the phenomenons resulting from it: when empty streets and houses leave whole city patches to themselves and open up for all sorts of new developments.

We find that the public spaces of those abandoned urban fields leave room for re-interpreting that very space: the lack of security may encourage the movement of dubious goods and the crimes that are associated with it, but we also detect appropriations of those spaces by more innocent groups. Public space that loses its original meaning and use often finds, for example by actions of greening, new interpretations and uses, often temporary and resembling experimental interventions. In literature the value of this terrain, vague and undefined, is appreciated – because there arises room for potential development that is not given in denser areas with more economic pressure. So, what a Top-down city development process often fails to acknowledge and integrate, we can see building up in the less defined spaces: there lies a path for development for underrepresented groups in society, and for new ideas.

Urban Design is not only the projection of the future – but to correct errors from the past.

Brent D. Ryan lives in Brookline, Massachusetts, and is a hybrid between city planning, architecture and research. He has looked at the built environment and the changes it has lived through since the beginning of his career. He shares with us the insights on his observations on current local responses to the Corona-crisis and relates them to his findings in the historic development of cities and other human crises.

Brent D. Ryan is Head of the City Design and Development Group and Associate Professor of Urban Design and Public Policy in MIT’s Department of Urban Studies and Planning. His research focuses on the aesthetics and policies of contemporary urban design, particularly with respect to current and pressing issues like deindustrialization and climate change. His first book Design After Decline: How America rebuilds shrinking cities, was selected by Planetizen as one of its ten best urban planning books of 2012, and his second book, The Largest Art, was published by MIT Press in 2017.

Any cookies that may not be particularly necessary for the website to function and is used specifically to collect user personal data via analytics, ads, other embedded contents are termed as non-necessary cookies. It is mandatory to procure user consent prior to running these cookies on your website.